While there are several excellent resources, refer for example to CVPR2014 tutorial [1] to get a working idea on SLAM components. In this post, I will demo how to implement a simple bundle adjustment module (pose-graph optimization only). A bundle adjustment module takes as input a) poses at each discrete instance in time, b) 3d point cloud. It outputs optimized poses and 3d points. If you are looking to simply use it without understanding theory, be warned things might not work out. Nevertheless you might want to look at the tool Bundler.

Ok, lets dive into pose graph optimization, ie. we only look to optimize poses at every time instant and ignore the reprojection errors by the 3d point cloud.

You may access my code here. It takes as input the pose-graph (in green). It optimizes a least squares cost function and produces the optimized poses (in blue). To understand the details of the cost function and how to solve the minimization problem (non-linear least squares) read on. You should be able to recreate the result here following the readme file on git of this project. 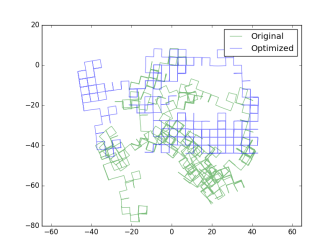 We represent pose at each time instant with a graph node. These poses can be obtained with odometry. But to concentrate just on the pose graph optimization aspect, we shall use the BAL Manhattan Dataset. This test dataset represents a graph with 3500 nodes and 5453 edges.  Pose are 3-DOF, ie motion in planar space (X,Y, theta)

The dataset represents a bunch of vertices (VERTEX_SE2) represented as ID X Y Theta. These are unoptimized poses of each node represented in the world co-ordinate system. Each line starting with EDGE_SE2represents a relative pose between 2 nodes. This format is referred to as g2o format (not to be confused with g2o library) . For more details on this file refer to the Manhattan datasets website A snapshot of the dataset is as follows :

After beating around the bush, now its time to kill the tiger 😛 !!. We try and define the error terms at each edge. Final cost function is sum of squares of errors at each edge. We minimize this cost function with an iterative method say Gauss-Newton Method to tune the poses at each node. Note that here the poses at each node are the optimization variables and relative poses from edges are the observations.

If you do not understand the basics of non-linear least squares optimization, it will be worth while to complete a short tutorial on ceres-solver before continuing any further. Especially pay attention to exponential fitting example in ceres tutorial.

Consider an edge from node a to node b. Let

be the planar pose on node a in world co-ordinate system. Similarly

be the pose of node b in world co-ordinate system. Note that given x,y, theta (VERTEX_SE2) it is straight forward to comeup with matrices

We represent the edge observation (obtained from file.g2o - EDGE_SE2) with

. It is important to distinguish between

will give pose of node b in co-ordinate system of node a.  The difference pose shall be

. Thus, the residue theta (del_theta=acos(D(0,0)) and residue displacement (del_x=D(0,2)) and (del_y=D(1,2) can be inferred from this matrix. This is literally it, almost all of the pose graph methods revolve around this concept.

A good reference ppt can be found here. To get a more rigorous understanding, I would highly recommend you to read paper[3]. If you prefer a video lecture, I can highly recommend, SLAM course by Cyrill Stachniss. If you do not have enough time to view all the lecture, you may skip straight to lecture 15 of this series, which explains least squares pose-graph optimization, which is most relevant to this blog post.

One need only supply the defination of the functions

. It has automatic derivative computation to solve this optimization problem with variants of Gauss-Newton Methods. This function defination is exactly same as above 3 sub-sections. In my demo-code class PoseResidue defines the cost function for every edge. The function (in main) AddResidueBlock() sums the residue for every edge. 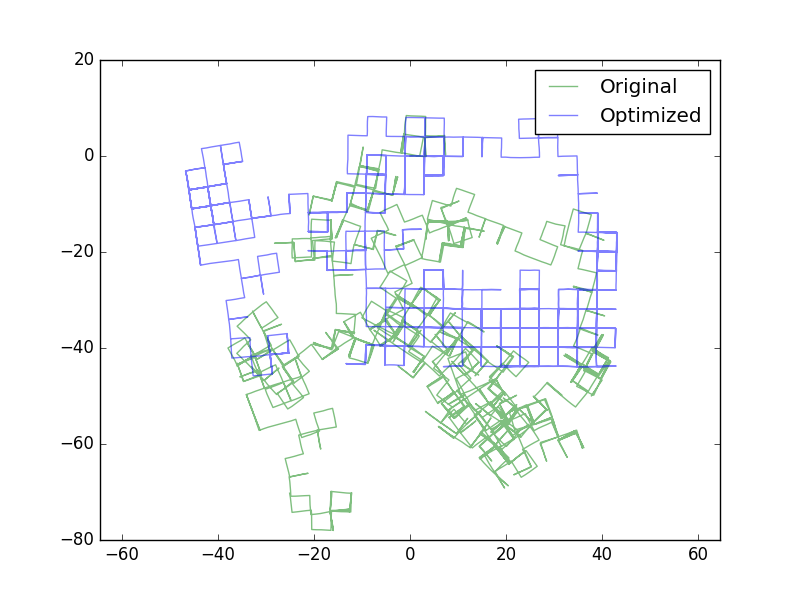 I have put up a PPT on recent advances in robust pose graph optimization in presence of false loop closures. You may access the PPT here. I have implemented some of these advanced techniques with toy-examples. The whole repo can be found here: https://github.com/mpkuse/advanced_techniques_for_curvefitting/